Progress by companies is proving patchy towards achieving the Global Goals. In a recent webinar, I discussed the need for them to embrace the logic of the business case and stop their pick-and-mix approach. 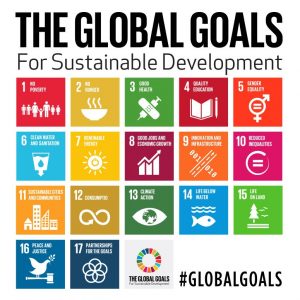 The clock is ticking towards 2030 – the deadline for achieving all 17 of the Sustainable Development Goals, unanimously adopted by world leaders exactly three years ago at a historic UN summit in New York. That may feel a long way off, but at time of writing it’s only 146 months away.

This summer’s UN progress report showed just how far there still is to go. To pick only one, the first on poverty, one in ten of our fellow citizens lives on less than $1.90 a day – the official poverty line – even if that has fallen dramatically from one in four at the start of the millennium.

Over 100 governments have now produced voluntary national reviews to report on progress at country level. However some are so late in preparing theirs – step forward the United Kingdom – that the voluntary sector has taken the initiative to produce its own stock-take: see UKSSD’s Measuring Up report issued in July.

My colleagues and I at Corporate Citizenship have been tracking what companies are and should be doing in response to this new global agenda since 2015. This summer we conducted our fourth survey of practitioner opinion, along with research into actions by 240 listed companies around the world.

Here’s a sneak preview of some of the findings: the numbers of firms saying they taking some action or engagement continues to rise – nearly two thirds are working with an NGO and nearly three quarters are in some form of industry or sector partnership. However our survey also shows nearly half are having difficulty identifying a business case for action or finding the direct relevance to the business. This is limiting buy-in from commercial colleagues.

Last week we ran a webinar (recording available here) to discuss the findings and were joined by Aberdeen Standard Investments to add an investment manager’s perspective. As well as having $700 billion of assets under management, they run the Global Equity Impact Fund which uses the SDG framework to identify companies creating positive measurable environmental and/or social impacts.

This finding – that companies are still not identifying the business case – is a pretty profound and depressing conclusion. It was echoed at the High Level Political Forum which met in New York in July and brought together some 2000 participants from governments, business and civil society to review progress. According to a report back by WBCSD, the need for increased focus on measuring business impact was one of the key takeaways.

The trouble is, too much of the corporate response so far has been on mapping existing activity against the 17 to show the contribution being made. That’s fine as a start, but if it stops there, it’s just SDG bingo – ticking off each in turn and calling out “full house”. Mapping against material impacts – a sort-of ‘pick-and-mix’ approach – isn’t much better because it doesn’t show how the business is changing as a result, either in response to market trends and public policy stimulus or so as to increase the intended sustainability impact.

The business case, and the size of the potential opportunity, was first spelt out in January 2017 by the Business & Sustainable Development Commission. They identified 60 sustainable and inclusive market ‘hotspots’ worth up to US$12 trillion by addressing the Goals and estimated that opening up these economic opportunities could increase employment by up to 380 million jobs by 2030. Their identified hotspots were in food and agriculture, cities, energy and materials, and health and well-being. (Full disclosure: at Corporate Citizenship, we were part of the team providing input, research and analysis.)

Now there’s a powerful new analysis of the economic potential, this time through the eyes of investors. Published by Citi in its Global Perspectives & Solutions series, this goes beyond an analysis of the opportunities from each of the goals separately. They have identified the linkages between the goals, classifying them between those addressing underlying causes and those achieving an effect, and showing where private capital is most effective and where public policy interventions are needed. Not a short read at 140 pages, UN Sustainable Development Goals: Pathways to Success identifies 23 specific investment opportunities, ranging from broad pathways such as recycling and energy efficiency to the highly specific such as e-doctors and online learning.

And the bottom line? They calculate that physical investment opportunities are worth $1.5 trillion annually in water, energy and the circular economy, with $800 billion in social investment areas such as education, health and hunger. They add that these are large numbers, but in fact are only a fraction of the total sums of capital currently looking to invest sustainably.

With the clock ticking, it’s time to move on from playing SDG bingo or pick-and-mix. Let’s see companies start reporting on the business risks and opportunities from the Goals, with the same rigour as they are now doing on climate, thanks to the Task Force on Climate-related Financial Disclosures. And let’s hope more investors ask awkward questions about why companies are seemingly missing opportunities to make money and do good.