It started as a dream…

What if, instead of just talking about grand concepts such as planetary boundaries and social well-being, I actually tried to do something positive and practical with my family? Just something small. Perhaps even planting a new wood.  And so it began….

A hundred years ago, this corner of East Sussex was a sleepy rural backwater with a few farms, this one among them. Big changes were coming, however. The end of the First World War brought social upheaval and the break up of the big estates. The farm was auctioned off, others like it too, and the area began to change.

By the 1980s, smallholder farming was no longer viable and the farm was split up. Renovation started on the run-down agricultural buildings, with the 18th century barn converted into a residential dwelling.

Change continued and thirty years later the property has passed into our care.

…. and most ambitious of all, planting a wood. We teamed up with the Woodland Trust. Family and friends were pressed into service. Together we hand-planted a thousand trees. That was in the wild and wet winter of 2014.

By the summer they had taken root….

…. and one year on were growing strongly…. 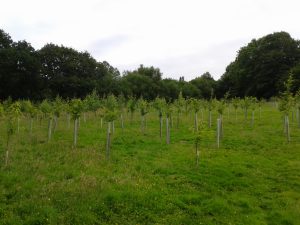 Today they are thriving. Only a decade or two to go, and our dream will be a reality! 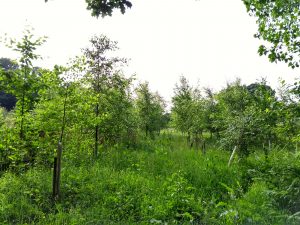